So, you think you might want to do some Flexible Printed Circuit layouts? Pull up a chair; there's a lot to talk about. The first thing to know about FPCs is that they are almost entirely different from rigid boards.

As much as 90% of the effort is on the mechanical side with 10% place and route. That doesn't mean that the Electrical or Mechanical Engineers are going to be much help. These things are an enigma to pretty much everyone. Count on re-routing it a few times anyway.

For starters, there's the 3-dimensional space puzzle. To visualize the twists, turns and bends that a flex circuit can and will do, it's common to use origami techniques to "paper-doll" the connectivity.'

Start with a piece of paper and a pair of scissors. Represent one connector by marking off pin-one. Create the general shape of your mock-up. Mark off the other end of the signal while in the final folded form. Flatten the paper out and see if you can draw a coherent line back to the other pin-one. Do this floor-plan thing again before taping out.

If you're able to use pin-one for the same signal through the entire system, you'll have fewer catastrophic failures. Go ahead and ask me how I know this.

One Layer at a Time

Adding a bit about single layer flexes, the copper is where you would find the dielectric core of a rigid board. So-called neutral axis construction is very clever when the flex has to go through thousands of bend cycles. The copper is sandwiched between 2 layers of flex materials. Putting the metal in the middle helps eliminate elongation or compression of the conductors. Lower fatigue for longer life is the reason for IPC-6013 type 1.

The most common FPC has two layers - IPC-6013 type 2. At least one end of the flex is likely to have a ZIF connector. ZIF stands for Zero Insertion Force and it works like an edge connector in that it slides into the mating receptacle. More on this later.

The other end is normally a low-profile stacking connector with the bendable area in between. Taking this simple idea forward, there will be at least three zones to consider.

Zone One, the Connector:

The physical connector will be soldered to the flex. This almost always involves a stiffener on the far side. Common stiffener materials are plain old FR4, aluminum, and stainless steel - that for some reason is called SUS. Polyimide can also be used for a thin backing material. Again, we will revisit this material soon.

The point of the stiffener is two-fold. You don't want your solder-joints ripping away from a flimsy ribbon of material. The stiffener will reduce wear and tear over the life of the flex. The metal ones also make a nice heatsink.

The Stack-Up for This Zone Goes:

Yes, all of this is for one-third of a two-layer flex.

Here's where the rules get interesting. It bends, twists, folds spindles, mutilates and mutates. Ok, the last few were just for fun, but you get the idea. The flexing comes in two flavors, static and dynamic. Static bending is also known as flex to assemble, and it's just what it sounds like; a one-time bend to put the assembly together.

Dynamic flexing is common in robotics and laptops among other things. Seriously, how do you think the signals from your camera reach the CPU? Tiny flexes run right through the hinges. Every motherboard has half a dozen or more flexes.

So, anywhere the FPC flexes becomes a stress riser. Ideally, your traces will not make any turns in the flex zone. Otherwise, they'd eventually peel up. Wider traces might split be into two or more thinner traces. It's more flexible that way. Another trick is to change from a ground plane to a ground mesh resembling a chain-link fence through the bend regions or often the whole flex - aside from the stiffened zones. Same reason.

For sure, you don't want any vias in or even near where you expect the bending to happen. They'll crack under pressure. Pads often use a couple of little spurs that radiate out and are then anchored by mask or coverlay to keep them from peeling up.

There are electrical and mechanical reasons to avoid running traces along the same path on the top and bottom. Electrically, you're coupling. Mechanically, you're making the flex stiffer with what is called I-beaming.

You may already know that the traces will want to be radius bends rather than 45 degrees when you are allowed to make a turn. That would be when the whole flex makes a turn.

Pro Tip: It's wise to add a sacrificial "tear stop" on the inside corners when the whole flex outline turns. It's a non-connected trace that arcs along with the bend. That way, when (not if) the inside corner starts to rip, the little metal smile retards the propagation of the tear. The function is preventing the tear from ripping into the vital traces that carry signals.

The Zone 2 Area Stack-Up is as Follows:

This is about as simple as a flex circuit is going to get. I worked on one that we called the "Hydra" flex after the mythological 9-headed serpent. The stack-up diagrams filled up most of the fab drawing. Anyway, the ZIF is ideal because the mating connector has a hinged clamp that can be opened to allow insertion/extraction without much – if any shoving or tugging.

If you're getting the notion that FPCs are on the dainty/fussy side, then I'm getting through to you!

All a ZIF wants is a flex circuit with a very specific thickness and fancy gold fingers on the correct side to make the electrons all excited - but not too excited! Molex is probably the Gawd-Fodder of ZIF but here's an old friend from Hirose stack-up detail shown below. Note that thermosetting adhesive is an alternative to pressure sensitive adhesive. Ever hear of a hot glue gun? Yup, same idea. Also, note that the zones tend to overlap a bit. Having the edges in the same location would stress the flex.

A Real-Life Example of a ZIF Stack-Up: 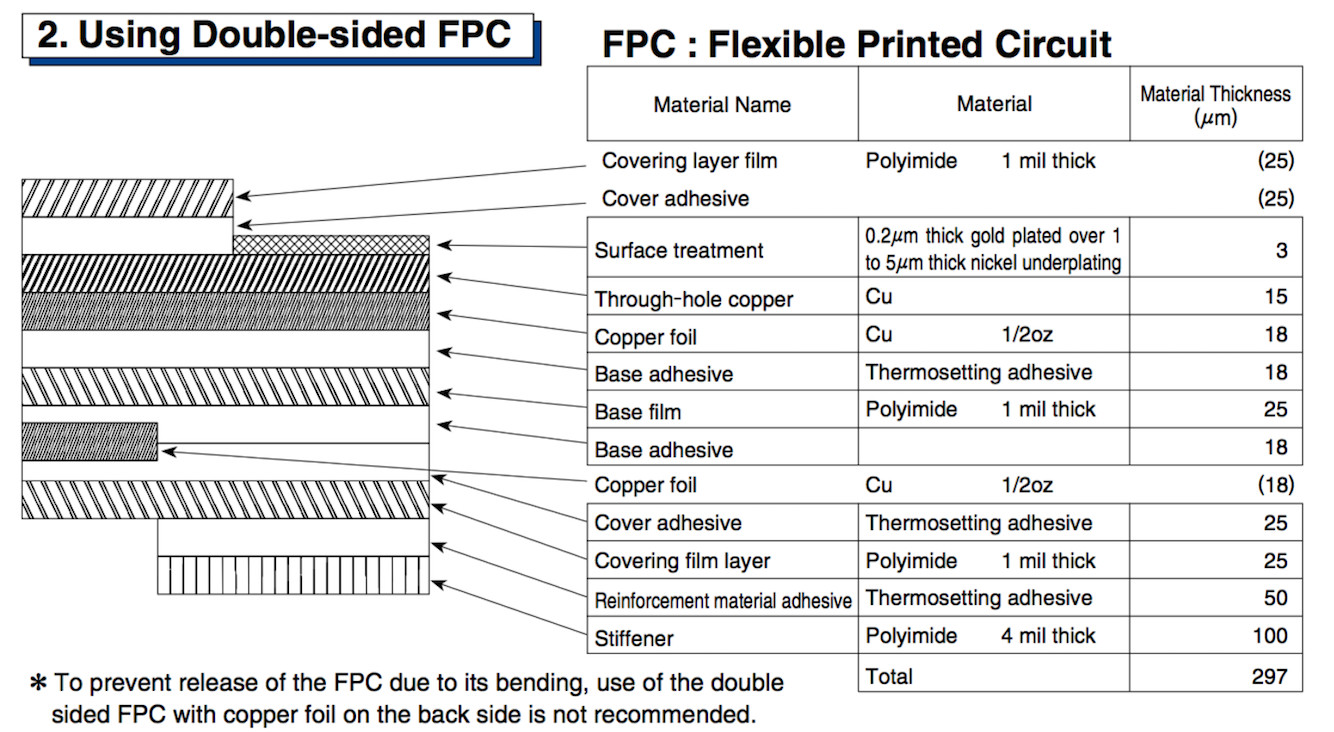 So what we have here is... a failure to communicate! This is a two layer FPC with about a dozen different callouts – for one zone! If you see two numbers for adhesive or some other material, it's not a range, it's the thickness before and after curing. Do you still want to do flex circuits?

Take another look at the Molex edge connector up top. Four utterly bizarre pad shapes interlocking with special tabs and plating specs for everyone. Being a connector, you just know that it's going to have a byzantine tabular data-sheet with the occasional missing data. Go ahead, "Make My Day." 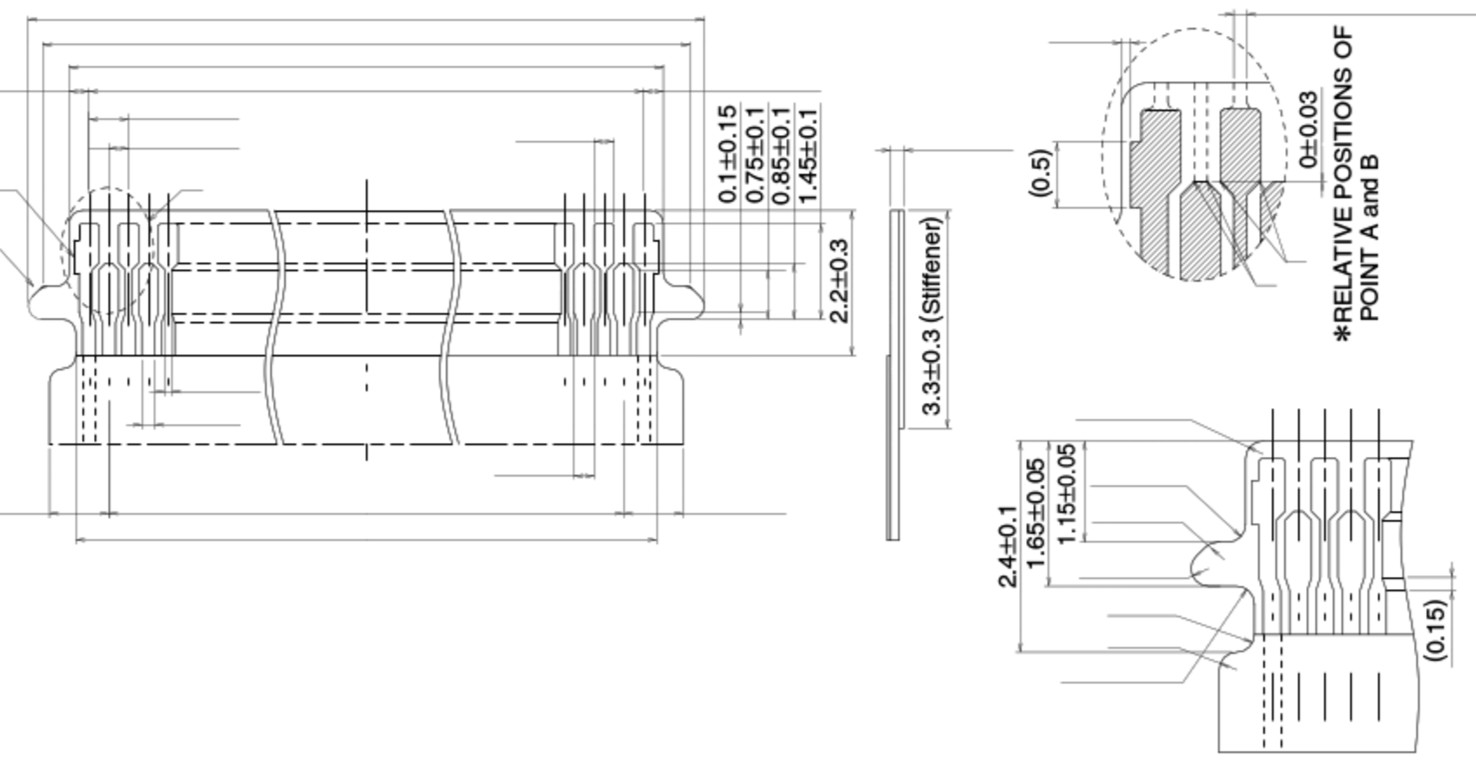 Meanwhile, Guru is a word that gets thrown around some. Even with that in my job title, I'm not above doing these things. Of course, there are simpler flex tails with one row of nice rectangular pads, but the advertising literature for the above type claims to allow more signals in less space. C'mon now, which one do you think the EE is going to specify?

You've got the aforementioned Camera Flex, the Keyboard flex, the Prox flex, the Haptics Flex, the Audio Flexes, the Display Flex, the Trackpad Flex, the thicker Battery Flex, the high-layer-count USB Flex and more all fighting for precious real estate on the Main Logic Board (MLB). There's only so much room for connectors.

It's not just consumer electronics either. The thinner Z-stack (in spite of the crazy stack-ups) and lighter weight will make flexes part of your life sooner or later. We can do additive processes with lines down to one mil. We can pre-bend them for tighter turns baked right in. They can squeeze in where no rigid can.

Final Notes: There's a lot more to it than this, but you've got to start somewhere. Rigid-flex got only a mention because it's two chapters on its own. The spec call-outs and materials are different. The rules are unique. The ecosystem of vendors is apart from the rigid scene though there is some overlap.

Note that I would like to provide a bunch of links here but they break down over time so Google is your friend. Just be aware that whatever device you're reading this on has at least a handful of these FPCs. Dig in. Be Flexible!